This is something I’ve been meaning to write about for a while. If you follow on me on Twitter, you probably saw my tweets earlier in the year from South Korea. Now I’ll explain why I was there, what I was doing, and what I’ve taken away from it.

Shortly after I transitioned from Masters to PhD student last year, a collaborative work trip to Tsinghua University in Shenzhen, China was announced, giving the opportunity for several Southampton students to fly out and build relationships with the new Web Science lab there whilst working on a project together. Although I didn’t go on this trip, an opportunity arose for me to contribute to the project remotely from Southampton (the wonders of the Web!) as some data collection was needed beyond the scope that the team could carry out by themselves. Doing this was really interesting, and became even more so when it was revealed that the Chinese students would be visiting us in Southampton early in 2012. I jumped on board a social committee that was formed in the DTC with the purpose of organising a week’s worth of trips to take the guests on in the evenings of their visit, and agreed to work on the new project that was started after a couple of days working on the culmination of the original one. This was all a fascinating experience, it was both great fun (we had to show them what England was about… so took them for karaoke and skittles at a traditional New Forest pub!), and a really productive week in terms of working on the joint project and fostering new relations.

To make things even better, a second trip was then announced – this time to KAIST in South Korea, for which I leapt at the opportunity to put my name down for. I was delighted to be selected, and so at the end of April I left with 9 of my PhD colleagues and a couple of staff members for an amazing 10 day visit to possibly the most incredibly country I have ever visited.

After a long flight (that was made to seem much shorter due to the comfort and helpful staff of Korean Air, and gave us all a great first impression of our destination) to Seoul, we travelled to Daejeon by coach, where we would be staying and working for the week. The following morning we were up early to meet our Korean colleagues at KAIST (which has a beautiful campus that was really showcased in the glorious sunshine and heat) and after a morning spent introducing each other, we split into three groups and got to work. My group had the broad target of researching cultural differences in online privacy, for which we looked at how Web users from the UK and South Korea differed in terms of their attitudes to online privacy. There were so many possibilities for us to focus on for this, so ended up settling on getting data from Twitter profiles and tweets to determine what we could infer about the users’ attitudes. We made an early demo of a Web tool that could analyse this in real-time (which will hopefully be developed further when we get the opportunity to host the Koreans later in the year).

While working on the project by day, we got to sample Korea by night. Trips to authentic Korean restaurants showcased how great Korean food is (I particularly liked sitting around an indoor barbecue, cooking our own meat, wrapping it in lettuce leaves, and then eating the thing in one!).
We walked up a mountain to find a Buddhist temple in what was such a tranquil and relaxing location that I sort of wish Southampton could relocate the DTC there… somehow I think that may be somewhat beyond our budget! On quieter evenings, we wondered around the streets of Daejeon to explore and take in the nightlife. It was incredibly how safe it felt, I’m not sure I would feel that comfortable walking around many English cities like that.

After a final presentation of our work at the end of the week (for which our group was coding the demo right up until the last second before it was needed!), we went out with our Korean hosts for a buffet, which was gigantic. It was like being in a supermarket, divided up into cuisines from around the world, with great food from each. I’m happy to say that even with the wide selection of foods, the Korean food still proved popular among our party. We then hopped on a coach for the 2 hour drive back to Seoul, where we would be staying for the weekend. This was one of the rather more scary points of the trip – our coach driver was pulled over for something (we think maybe speeding, but are doubtful as there was no decrease in speed afterwards!), but we arrived safely in Seoul ready for sleep. Over the weekend we got to see some amazing places: Saturday consisted of a trip to the Demilitarized Zone between North and South Korea, which was really quite surreal, but a great experience to be able to see into one of the most secretive countries in the world (and one of the tallest flagpoles!). The Sunday was filled with a tour of Seoul itself, which was a city so wonderful, so big and so… varied, that I think I could easily live there.

And then it was Monday, and time to leave. We were all impressed by the Korean country, culture and people. It was a great trip during which we’ve all made connections, and it was great to see some of our Korean friends at the Web Science 2012 Conference in Chicago (along with the professor from Tsinghua). These trips have definitely made me feel part of an international community, with the sort of global collaboration I would not have been expecting until possibly post-doc level. This is a great confidence boost, and is making me feel part of something really big, so I think the perks I’m referring to in the title are not just the opportunity to go on these trips themselves, but to have that feeling of being part of something much bigger: a global Web Science network. 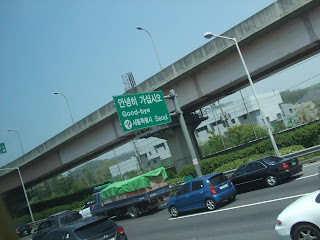 More details on the trip to KAIST can be found on the Web Science DTC Website.
Posted by Chris at 12:10