A Viva, A Trip to Norway and A Conference Poster Accepted

The last few weeks have been rather busy, with a few developments in my PhD occurring. This post will be split in 3 parts to cover them...

A couple of weeks ago, I faced the first examination of my PhD progress. After writing a 47-page report covering all of the reading and work I have carried out over the last year, along with plans for future work based on my preliminary thoughts and findings, I faced a 90 minute viva examination with my supervisors and an internal examiner. I was quite nervous going in to the exam, but immediately relaxed when it became apparent that it was really no different to having a chat to anyone about my research, just a slightly different context. There have been so many opportunities to talk to various people about what I'm doing, including talking to other people on my PhD programme, that it felt completely natural to discuss and justify what I was doing. To do it in a more formal setting will no doubt prove to be invaluable experience when the upgrade and final viva come around.

There were a few areas I was required to clarify and explain, but it all went rather well, and I was declared to have passed and am now through to round 2. Time to start putting everything I've read about so far in to practice, and run some studies! Somehow it seems crazy to think I've been doing this for a year now, it has flown by!

A week after my viva, I was boarding a plane to Norway for my second Web Science trip of the year having visited South Korea in April/May. We spent 8 nights in the country, which was split between 4 in Tromso, followed by 3 in the small, remote island community of Dyroy, and then back to Tromso for the final night. We covered a couple of different projects over the course of this trip:

For the first two days, our group was split in half and while the other team worked on a project about Open Source and Open Data, I was working on a project to consider the Web Science perspective of a planned telemedicine program in Norway. We were working at the local University, in the National Centre for Integrated Care and Telemedicine, and after a morning briefing we set out with the task of uncovering various Web Science issues with the plan for a national Telemedicine system, ready to present back to our hosts the following afternoon. We had access to a variety of researchers working in the Uni who were all key to the telemedicine movement, so spent the first afternoon interviewing to discover their views and opinions on it.

Our task was not to propose a new telemedicine system, or to present back what the researchers already knew. We had to give a unique, Web Science spin on the issues at hand, to provide an inter-disciplinary perspective that may not have been considered beforehand. We focused our work around a fictional persona, Anna, who had diabetes and we plotted the progress of her life and how she managed her condition both now and in the future if telemedicine systems were to become more widespread. We took the telemedicine umbrella and narrowed our focus to a more specific element - looking at how information flows in healthcare can be helped by using the Web. Our presentation covered a number of issues, and we then followed this up by hosting a discussion with the audience to address any issues they had become aware of.

Overall the project went really well, I think we all felt like we were doing "real" Web Science, and the feedback we received from both the Norwegians and our own professors was really positive. We rounded things off with an evening beach barbecue (yes, inside the arctic circle!) at a nearby Fjord, Grotfjord, which was simply beautiful.

After hiking up a mountain outside Tromsø on Saturday, where we reached a cable car station at the top with magnificent views overlooking the town, we were given a briefing in the evening for the next project. We were due to get a ferry to the island of Dyrøy the following day, and were split into groups to again cover two projects: the first about how young people in such a remote community could participate in political issues using the Web, and the second, in which I was allocated, about how young people could assess the credibility of information online. We would be working with local school children who had grown up on Dyrøy, so planned a project that we could do for a day to focus on issues of trust online. 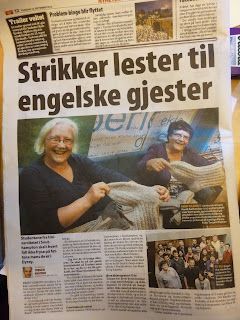 On the Sunday we spent 2 hours travelling through the fjords by ferry, until we arrived at Dyrøy. There was a welcome party to greet us, and we were each presented with a fantastic pair of hand knitted woolen socks (there was an even a story in the local newspaper a few days before about them being knitted in anticipation of our arrival - it was such a nice thoughtful gesture that made us all feel incredibly welcome!). We travelled to the old trading post on the island which has been converted into a guest house, where we all stayed as one big Web Science family. Our host was absolutely amazing, and was so accommodating that I think none of our party wanted to leave. Feeling so comfortable really made it easy to settle in to the community and get to work!

On the monday we arrived at the school and began work on our project. We gave our group a challenge of finding things online (such as where Obama was born) and asked them to find two answers for each question and state for each source whether or not they trusted it and why. After getting them to think about issues of credibility and trust by doing this, we then set out to create a presentation where half the group presented an argument that the Moon landing was faked, and the other half proposed a counter argument. It was a lot of fun, and I think even some of the older academics where amazed at what "evidence" there was to be found online to indicate the landing *may* have been faked...

The following two days were covered by a local seminar on the island to cover the development of the community - specifically focused on youth power and participation in community development. For the first day, the seminar was in Norwegian, and so we were placed in a separate room with a translator (who was fantastic and did a great job!), and given the task of creating a social media report of the serminar's content. We split the task between us, with Twitter, Facebook, liveblogging, blogging and Storify all used to generate our social media presence. I carried out a liveblog which you may have seen at the time, and all our efforts are linked to from the Web Science DTC blog. It was certainly a challenging but rewarding experience - I don't think any of us have done anything that close to journalism before!

For the second day of the seminar, we were running an English language track where again we split into groups. I led a group around participation, based loosely on my research about charitable engagement online which I applied to political engagement, and had a discussion with students from another school about how to engage politically online - using clips from the Kony 2012 video for inspiration. We then listed some questions for a panel of Web Scientists from around the world who provided answers in a Skype conference call that afternoon.

We travelled back to Tromsø that evening, and after dinner saw an amazing Northern Lights display which really did put a perfect end to a great trip. We had seen it once earlier in the week, and were already declaring that we had been exceptionally lucky to see it, so to see it again, and so active, was absolutely incredible. It is one of the weirdest, but exceptionally beautiful things that I have ever seen.

While I was in Norway, I received an email confirmation to say that a recent submission to the DE2012 conference in Aberdeen in October had been accepted for a poster presentation. I will be creating and showcasing a poster of my abstract titled 'Measuring the Megaphone - How are Charities Using Social Media for Marketing', which will cover the impending study I will be carrying out to determine how and why charities are using, and think they are using social media. This will enable me to know exactly what I need to measure to determine their performance going on with my research in the future. So, overall, things are looking good...!

Congrats on passing your 9 month viva, and the poster at DE2012. (Some of my ex colleagues from Newcastle will be up there with a demo of the French Kitchen that I worked on.) The Norway trip sounds awesome -- it's wonderful to read about real Web Science being done.

Thanks Clare :) I'll keep an eye out for the French Kitchen demo at DE2012 - it sounds really interesting!

It was really good to go to Norway and work on a completely different Web Science project compared to what I'm used to doing everyday. I'm hoping there will be more opportunities for projects like this!!