Today I am in a remote part of Norway - Dyroy, attending an annual seminar about the local community. I'm part of a delegation of Web Science PhD students from Southampton who are listening to an English translation of all the talks. We're attempting to cover everything on various forms of social media, and I'll hopefully update this blog with things that are going on.

So at times this post may get a bit crazy, as I will probably edit things and republish before noticing I've messed up the format or something, so I apologise in advance!


Twitter timeline of the #dyroy hashtag is below, this should provide much quicker updates than I can provide! Tweets about "#dyroy"


As a bit of background, we did some work at the local school yesterday, which is summarised on the Dyroy seminar webpage. It was really interesting to talk to the students who are growing up in the community, and to see the amazing facilities they had!
I'm going to pass over to a colleague now - @wfyson on Twitter - who will take a stab at keeping this blog up to date... good luck to him!
So right now the Norwegian minister of municipalities is speaking. She has been talking about the need to give young people the opportunities to have an impact, highlighting research that shows this really does make a difference. Many of the municipalities have youth councils, hoping in the future their is 100% youth coverage in the municipalities.

I should probably say that the minister is Liv Signe, and you can find out more about the ministry at http://www.regjeringen.no/en/dep/krd.html?id=504

"We need to listen about their [young people] dreams and plans!". We shouldn't be afraid of youthful arrogance she says, and missteps are all a part of youth. Certainly sounds very courageous! "Dare to be bold!"

Listening to young people should spread across the municipalities on to the towns and cities, until the whole country is listening. And that's the minister finished, very inspiring speech (much more exciting than some of our ministers...!)

Speaking now is Bjarne Daehli (or possibly someone else... no one here is quite sure. He is speaking from Oslo though. He is introducing us to to a study about power and its effects.


A couple of pictures of the Web Sci team hard at work, covering this event on social media as much as possible! 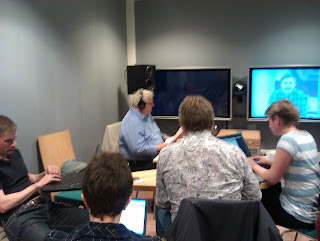 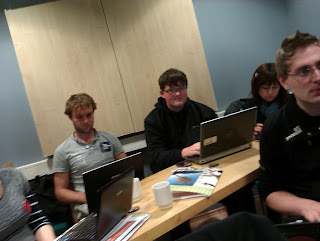 @wfyson is back now after @cpheth hijacked (his own) laptop

Bjarne is talking about schools - they are good teaching students theoretical ideas, but to get students to practically contribute good learning is very difficult.

Norwegian institute for regional development surveyed the municipalities - young people were found to have an influence in municipals, but only providing you don't give them enough information - this is noted as being paradoxical...

Very rare that youth councils are used concerning issues about health and schools - this is quite odd. What are the youth councils really for Bjarne asks. It should have a clear job description, how is it chosen and how is it represented, too easy to skip over this part.

People often problematic the issue of youth, and that they don't have any real influence, but now it is regarded that a youth council does make a better municipality - the same people can't keeping problematising any more! And on that note, Bjarne is finished!

Next up is Inga Marie Skavhaug, from the district centre: local development for local area. Children and young people are a quarter of the population - yet they don't have any formal power until 18 putting pressure on them to make sure they are heard.

Tried to do a survey over the phone, but was a bit tricky, so set up a committee to focus on a few municipalities. All of them had their own plans on working with youth. Interviews were conducted with various stakeholders. The report found there was a dependency on certain players and a need to share the knowledge - need to build a national knowledge base, to work out how to proceed on a national level based on findings from the local level. Work should take place on young people's terms and can come up with initiatives.

Now an in depth view on a couple of counties...

An important aspect of the study was whether youth thrive, having access to good transport and whether they would be attracted to moving back to municipalities after going off to university.

Two strands... get a youth council in each municipality and holding annual youth conferences. These involve career planning and events talking about political issues.

And now time for a short break... our translator has been working very hard!

While Will takes a break, here's a picture of the Dyroy "Lambassador"...! 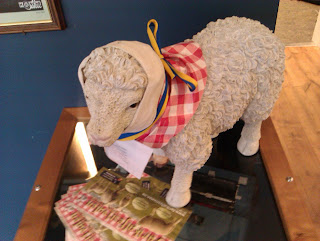 We're back (well I am, not Will... yet) - and we're hearing from Anders Waage Nilsen. He is releasing a book this autumn which he claims will "change the world" - aimed at young people. "This book will change the world" being emphasised. We have huge challenges in today's world, but from 1900 we have taken a massive leap in our ability to understand and think collectively.

He thinks young politicians have a major responsibility to tackle the current problems of the world. Now he's moved on to 3D printers, and how they've been purchased for younger people to play with. This is revolutionary and he questions what effect this technology will have on the community of Dyroy.

How do we give young people the feeling that they can make a big difference, Anders asks. My own research into social media would imply that these tools can be used to shift the traditional power structures and give groups of people such as younger generations a massive increase in collective power.

He finishes by giving an equation for happiness as:

There's a panel of speakers up now, about to have a debate (I think). The first is introducing herself, a member of the farmer's party. There seems to be a lot being said at the moment, so I'm going to try and pick out bits where Web Science would be most relevant... (edit - ok, that didn't work so well so I've tried to put in their key point)

Young Conservatives rep up now, emphasising that young people are the present as well as the future, and that shouldn't be forgotten. The only thing they ask for, allegedly, is a chance.

Now the Labour rep who states that even if the young aren't able to vote, they should definitely be able to be heard. The young can provide a much broader perspective on many issues. Young people are needed in the municipal government.

Final rep is talking now, but I missed which party he is from. He wants to be contraversial and says that school councils that he's visited haven't always worked, although there are success stories too. He reaffirms that young people do want to have have an impact, though. Now saying that demonstration parades aren't as necessary any more, because of what social media offers (yay - that's my research coming up now!!! Now how would they measure the success of that on social media....?).

Now the've all introduced themselves, the debate is starting.

And as you may have noticed, I haven't updated for a while, I've been having phone issues so I will point you to http://dtc.webscience.ecs.soton.ac.uk/2012/09/live-blogging-from-norway/ which lists all the other coverage we've been doing of this event - hopefully it will be covered there somewhere!


Right - I'm back, there is a talk going on at the moment but I'll try and get the liveblogging again when the next one starts!

So the talk is starting now and the speaker is talking about how lovely Dyroy is - I agree completely! She will be talking about Identity - something I covered on the Web Science MSc about a year and a half ago, so should hopefully be a nice spin on it in this context.

She says she can identify with Dyroy because it is not too different from where she comes from. Identity refers to aspects of a person, something that is long-lasting over time. However there are changeable things, and un-changeable things that comprise identity - she notes this comes from Wikipedia :).

She's now saying that the only thing that is constant is that she is a woman - everything else she can change as she grows older. I wonder how this differs on the Web where a footprint is left behind of everything that someone may be. Does this make identity more changeable, or restrict it because everything from someone's past is always visible?

Now a talk about 'international trade and the global student'. The speaker is talking about how he went to Russia and then China, and the fun times and experience he had. He calls China "a new USA". He says any young people attending who are inspired to travel abroad will get more out of it than staying in Norway... umm I think that's the opposite message they're trying to put across today.

After an afternoon coffee break, we're off again. This one's going to be in Swedish though, so we're not sure how the translation will go. This is going to be a panel of guests, one of whom is Swedish so the translator isn't sure how it will go - we'll see. I think based on the panel this morning that this may be quite hard to type up as it goes so I might leave this one to my colleagues who are doing CoverItLive...

While the panel debate is going on, I'll just point you to a video interview I did earlier in the day, speaking about what had been covered so far... Disclaimer - it was rather a spur of the moment sort of thing, so a lot of my responses were my natural reactions based on the nature of my research (marketing) and so some of the things I talk about (power relationships, for example) may be slightly biased towards that rather than Web Science in general!