WebSci13 and Some Thoughts

I've spent the last few days in Paris for the  ACM WebSci13 conference, hearing the latest views and research about the Web from leading experts from around the world. Having been at WebSci12 in Chicago last year, it was great to see some familiar faces and hear updates on the research that is being done. Some highlights and personal thoughts: 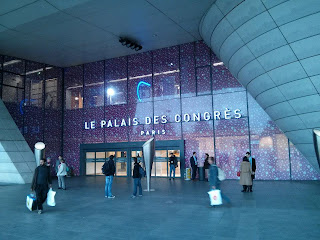 Wednesday 1st May - Workshops - WebSci Social Theory
Before the main conference started, I attended the very first workshop on "harnessing the power of social theory for web science", organised by my fellow Southampton colleagues Ramine Tinati, Lisa Sugiura and Huw Davies. The workshop sought to introduce a dedicated session for social theory whereby authors who may not have previously considered submitting to an ACM conference could present their work. It was a great success and I think this will become an increasingly vital session in future websci conferences.

Thursday - Pecha Kuchas praised and a warning about computers being evil
On the first day of the conference I presented my paper "Rethinking Measurements Of Social Media Use By Charities: A Mixed Methods Approach" in the pecha kucha session (a presentation format where you have 20 slides that each automatically proceed after 20 seconds). It was a different academic challenge than normal to cover a 10 page paper in this way, but it was worth it; things seemed to go well and I just about managed to keep to time before my slides transitioned to something else. The session in general was lively and snappy, the format providing an opportunity for short, sharp presentations that were just as memorable as the longer talks.

Later in the afternoon, Cory Doctorow presented a very interesting keynote and one of the key messages I took away was the risk of computers lying to their users about what they're doing in the background, framed in the context of DRM... there was also a nice explanation of why DRM isn't effective, but I won't get in to that argument now.

Friday - Southampton representations shine
After Dame Wendy Hall had chaired a panel discussion for the entire ECRC group of conferences that were located with us in Paris,  it was the turn of more Southampton students to represent the University and two of the presentations after lunch made one of the best sessions in the conference - Paul Gaskell about predicting financial markets on the Web, and Aristea Zafeiropoulou discussing the privacy paradox and why people share locatiom data online.

Following this was the poster session and Southamptoner Terhi Nurmikko was awarded the best poster award - fantastic news and a great achievement.

There was also a very interesting talk by Clare Hooper about the culture of Web Science and the representation of different disciplines in the conferences so far. One very interesting point that struck me was the trend in topics published about depending on what conference WebSci was collocating with each year, and I tweeted at the time about whether, based on this, WebSci should collocate with a social science conference in the future to potentially help address a slight imbalance towards more technical papers from computer science backgrounds.

I'm starting to imagine, after feeling part of a huge event at this conference having been collocated with CHI, what it would be like to attend a WebSci conference where there is also a dedicated social science conference as well as a more technical conference; the community in Paris felt great, I'm sure it would be brilliant with an additional influx of social scientists who would hopefully be attracted to the WebSci sessions as well. It is just an idea, but it seemed to go down well on Twitter so we can see what happens going forward. I think it would certainly be a great way to build on what the Social Theory workshop brought to this year's conference, and that is an aspect of the whole event which I believe should be pushed for passionately as future conferences are organised. I would be really interested to here more views and ideas about how we could achieve this.

Saturday
The final day contained a large amount of content: Stéphane Bazan gave two great presentations - firstly about the Digital Economy centred Web Science course at USJ in Beirut which was a fantastic example of why Web Science definitely doesn't need to be based within Computer Science, and secondly about whether people around the world are equally safe on social media which provided a fascinating insight in to how the Web is currently viewed from a very Western perspective. Mark Frank and Tim Davies then provided a Southampton double act to present about whether it is right to call for raw data, by questioning whether this exists at all in the first place.

And so WebSci13 drew to a close, with next year's venue announced as Indiana, USA. I'll be hoping to submit again and make it three in a row for WebSci conferences, and at that point I should be nearing the final stages of my PhD. For now though it is time for to write my transfer thesis, and so I have a few weeks of writing ahead of me...

More details about the conference are available at http://www.websci13.org/