This week I've been in Oxford at the RCUK's DTC/CDT Summer Meeting: "Digital Revolutions". This was a 2-day event comprising of a mix of keynote talks, facilitated group sandpits and networking.

The first thing that hit me upon arriving at my table in the rather large tent in which the main part of the event was situated was the number of DTCs/CDTs (Centres for Doctoral Training) that were attending. Perhaps rather naïvely I had only ever thought there were a handful, but it seems there were many more than I expected. The Digital Economy is going to get a lot of very talented PhDs coming through in the next few years, ready to lead and innovate in the cutting edge areas that the DTCs cover.


We were first asked to map how our research interests, areas, and ideas related to the Digital Economy and Digital Revolutions, as a way of seeing how we each linked together. This exercise revealed that while the DTCs each specialise in a particular area, many of the underlying concepts of the Digital Economy are common to all, and everyone was certainly able to relate with what everyone else was doing.


The keynotes that followed were of a very high quality, beginning on the Tuesday morning with Turi Munthe of Demotix, an online network for freelance photojournalists. The site offers photographers a way to make money from their images of newsworthy events by handling the selling of the rights to media publishers, and Turi highlighted its usefulness for activism by allowing on-the-ground citizen reporters to get reports of what is happening around the world out to the media.


Following this on the Tuesday afternoon was Rob Gifford, the China Editor for the Economist, who gave a fascinating presentation about his journey across China and how the use of technology is completely different around the World. He quoted a Chinese proverb: "To get rich, build roads first", to reflect the enormous surge in recent development. And as technology develops and is deployed, access to these digital technologies provides new avenues for citizens to report events such as the 2011 high speed train crash which may have otherwise gone unnoticed.

Finally, on Wednesday, José Gómez-Márquez gave a presentation via Google Hangout from Boston (where it was 4am at the time!) about innovations in digital healthcare initiatives that could be distributed where necessary, and used, re-used, refashioned, modified and customised in order to best suit the needs of the community using them. This provided an incredible insight in to the future of what healthcare could turn in to, and led to a few discussions among the attendees about robotic carers and whether people would be willing to accept healthcare in this way.

We had another task of coming up with what a potential news headline could be in 20 years, based on what a group of us at Digital Revolutions could achieve. We then had to get out on the streets and ask the people of Oxford their opinions. Our group decided to focus on data; in particular a "data revolution" resulting in The Data Strike by data co-operatives that could be formed based on our realisation that people may at some point become overwhelmed by what is being done with our personal data. Where will this end? Will cities run automatically based on where a machine somewhere knows we are? What happens when people rise against this, and stop giving their data? Would infrastructure fail? It was fun to think about this in a sensationalist way, considering both the utopia of a city that runs perfectly because it knows everything about everyone, and the contrasting dystopia that could emerge if people want to cling on to their personal data themselves. 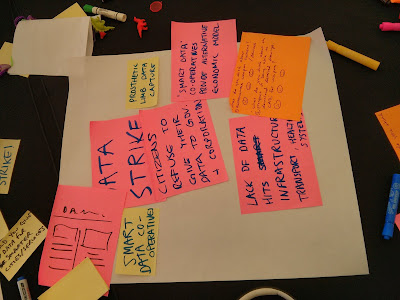 So we went out and asked people in the nearby train station what they thought about this, and where they thought their data should be held. The responses were interesting, revealing that some people thought it was too late and there was already too much data flowing to ever be plugged. Others put incredible trust in the Government (I wonder whether they knew about PRISM...) and thought they were the best bet for managing our data. I imagine other countries would have had very different views. 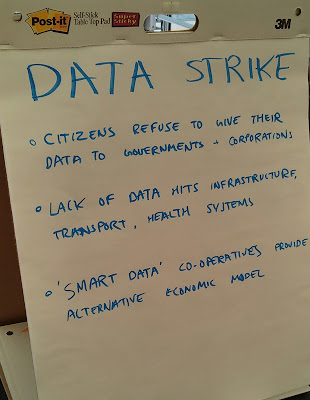 The event was a nice change and break from my PhD topic, but still had enough ties to the broader topic of Web Science to keep things comfortable. We were lucky that Oxford was having a mini-heatwave and so an evening BBQ and a lunchtime spent punting were both very enjoyable! We only crashed a couple of times, and I think we provided priceless entertainment to the Oxford locals who watched from the riverbank!